Ionic capital : A capital used originally by the Greeks in a system of supports called the Ionic order. The Ionic order is based on a set of proportions and includes a particular kind of column base and lintel as well as capital. The order was also used by the Romans. In the medieval period, the capital was often used without a strict adherence to the rest of the system. An Ionic capital has a volute, or a spiral scroll-like carving, on each side as its major decoration. Ionic capitals are relatively rare in medieval buildings. 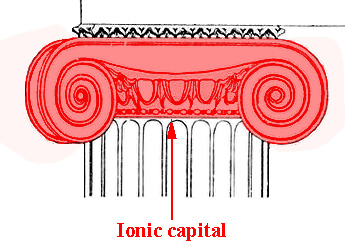 All images and html code in this project are copyright Jane Vadnal. Any use of them without her express written consent is prohibited. Email: medart@unixs.cis.pitt.edu. Created by Jane Vadnal 05/97