east end:The end of the church where the main altar is placed and where the main part of the service takes place. Generally, medieval churches were oriented toward the east. However, topography of the land or other factors may have prevented an absolute east- west orientation for a church. The term east end, is generally used to describe the area where the main altar is placed in a medieval church, even in those cases where the church is not oriented exactly toward the east. Some buildings, notably Old Saint Peter's in Rome, were oriented to the west. 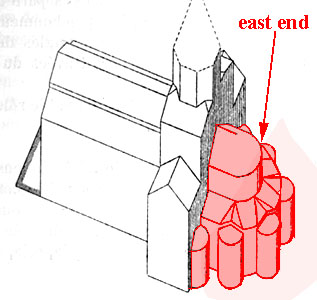 All images and html code in this project are © Jane Vadnal. Any use of them without her express written consent is prohibited. Email: medart@unixs.cis.pitt.edu. Created by Jane Vadnal 05/97